The second reason why the blog has been quiet is that Iâ€™ve been in France â€“ nearly nine days without any internet access whatsoever, which must be my longest non-on-line period for several years.

We stayed in a gÃ®te on a pig farm, of all places, in the CÃ´tes dâ€™Armor on the north coast of Brittany, fairly near to St. Brieuc. It was a lovely location â€“ the accommodation was quite modern but the farm was a slightly ramshackle collection of buildings and an almost stereotypical evocation of the rustic French rural idyll â€“ vegetables growing in the garden, ducks and geese by a pond, a goat by the farm entrance â€“ and I saw a farmer relieving himself against a courtyard wall on Sunday in full view of our front door.

Not really very near St.Brieuc â€“ about 150 kilometres away and actually in Normandy â€“ is Mont St.Michel. I went there probably over 25 years ago and all I can remember is crowds and an abbey on the top â€“ the sort of sight that Iâ€™ve since thought is probably better seen from about five miles away and anything nearer tends to destroy the experience.

From a distance itâ€™s probably the closest actual modern structure to look anything like the mythical structures of romantic Arthurian legend â€“ the Isle of Avalon. Perhaps this stuck in my mind as Iâ€™ve written a reference to Avalon rising out of the waters in an early chapter of â€˜The Angelâ€™.

On returning after such a long time I had another serendipitous experience. We struggled up the steps to the abbey on the top of the mount just as the ticket office shut at 6pm. If we wanted to see the abbey then we had to come back later as there was a special evening opening starting at 7pm. I couldnâ€™t see why they didnâ€™t keep the abbey open for the duration.

So to kill time we went back down to the base of the mount which, for anyone who doesnâ€™t know the place, is about half a mile of one narrow street lined with hotels, restaurants, crÃªperies, gift shops and anything else designed to part tourists from all over the world from their money (the place was full of Americans and Japanese as well as the normal British, Belgians, Germans and Dutch that tend to visit other places in Normandy and Brittany.)

Standing among these palaces of tat built into largely medieval stone buildings I was perversely reminded of visiting Disneyland (the mount itself looks very like Disneyâ€™s Sleeping Beauty castle from a distance) and theme parks — particularly Legolandâ€™s castle with the dragon rollercoaster.

After buying extortionately priced ice-creams and looking at souvenir rubbish like snowstorms â€“ I actually saw boxes of the stuff being delivered to shops with â€˜Made in Chinaâ€™ in big letters on the side â€“ I was ready for a similar rip-off experience at the abbey.

But I neednâ€™t have worried. Just ahead of us walking into the abbey was a jerky Scandinavian on his own who was photographic everything. As soon as he entered the first big room and then ran out again to grab a photo through the narrow door, which framed a woman playing a harpsichord.

Iâ€™d read something in the Rough Guide about the evening openings having music and â€˜installationsâ€™ but I didnâ€™t realise it was such an elegantly organised event that made superb use of the alternately vast and claustrophobic plain spaces of the abbey. Occasionally artworks and sculptures were arranged along the route â€“ making great use of atmospheric, coloured lighting. See the photo for an example of how a vaulted stone ceiling was lit from beneath and reflected into a pool of still water. 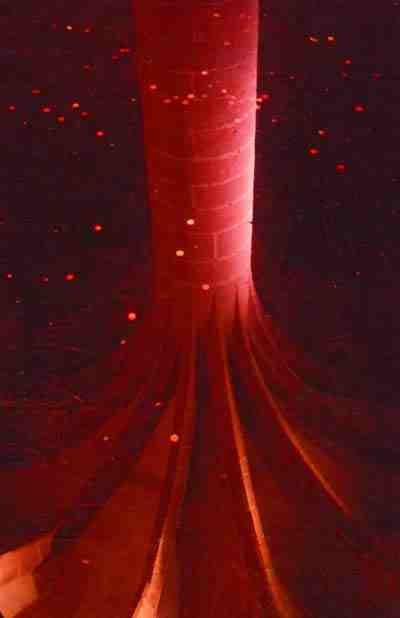 These were interspersed with other musicians â€“ a cellist playing a Bach piece, a flautist beautifully playing Gluckâ€™s â€˜Dance of the Blessed Spiritsâ€™ in a darkened crypt and, in an almost magical touch, as we climbed out of a crypt up a narrow stairway and emerged into the huge space of the abbeyâ€™s nave, the emptiness was filled by the music of a harpist.

To walk through the abbey with the art, music and lights was to luxuriate in the appeal to the senses of art, music, light within the feel and smell of a building that, in parts, dates back nearly a thousand years. It confounded my expectations and was a complete contrast to the touristy clatter below. I read in the guide book that only a third of the hordes even make their way up the mount to the abbeyâ€™s walls â€“ far fewer will have been so rapt by it as I was.

There seemed to be something quite understatedly European about the use of art and classical music â€“ I know my German colleagues tend not to think of opera and classical music as somehow elitist â€“ until fairly recently â€˜Last Night At the Promsâ€™ was broadcast live on German television.Â  Iâ€™d like to try and convey some of this non-self-conscious appreciation in The Angel.