After the tutorial with Emily the weekend before last I decided to take a walk to see how things were around Village Underground as I’d not been there for a while. It was the first time that I’d had chance to visit the new Shoreditch station, which radically improves the transport links through the area. Only a week or two before I took a ride on the train, a new bit of line was opened between Dalston Junction (itself only re-opened for less than a year) and what used to be called the North London Line. This piece of newly re-instated line links to the old East London tube line at Shoreditch and that’s been connected to the rail network on the south of the river so that Shoreditch now has a remarkable train service Â every 5 minutes with some trains running from Highbury and Islington to West Croydon.

The station is, as you would expect, very modern and, in a short time, seeing as it’s not far at all from the top end of Bishopsgate and the Broadgate development, could transform the character of the area in a short time. I’m not sure whether this would be good for my novel or not — I guess it could be a move behind property prices shooting up and pricing artists like Kim out into the country.

I looked out from the train as it left Shoreditch station and got an unusual rooftop level view of Village Underground (see below). I posted this photo on their Facebook page and they officially ‘like’ it. 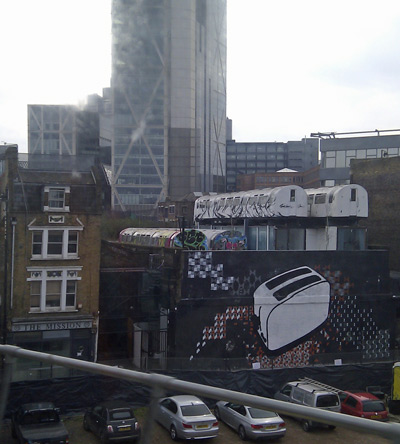 The roof of Village Underground itself, where the tube carriages are placed, is actually part of a viaduct that carried trains into Broad Street station (which was next to Liverpool Street) until 1986. The railway bridges over Great Eastern Street and Holywell Street were only removed in the 1990s. A new viaduct was built crossing Shoreditch High Street and then joining the old track bed which runs directly north up to Dalston and this involved the demolition of an area opposite Village Underground to accommodate the curve of the track as it links the two together.

Holywell Street, which was a dead-end blocked off to traffic when I first visited Village Underground has now been re-opened as a red-route connecting the London Ring Road to Shoreditch High Street. So this area, despite looking like something of a neglected inner-city backwater, has seen a lot of change recently. Here’s the scene at ground level with the current toaster mural.

The City encroaches ever further towards Shoreditch and the Heron Tower, now the City’s tallest building, has been completed half a mile down the road. It’s the Broadgate Tower that looms most intimidatingly over Shoreditch High Street — here seen with the friendly shape of the Gherkin by its side. This photo was taken close to the church of St. Lenonard’s — famous for the line in the nursery rhyme Oranges and Lemons — ‘when I grow rich, say the bells of Shoreditch’. (I’m going to have to work in a few references to this.)

I took the train from Shoreditch to Dalston Kingsland, a place I visited 20 years ago at night when it had no semblance of the gentrification that is hinted at today. From there I took the North London Line to Hackney Wick. I’ve been to Hackney before, which I’ve found nowhere near as intimidating as its reputation — there’s a good pub there called the Pembury Tavern, but never Hackney Wick.

Hackney Wick station is a desolate place, cut off by railways and road schemes, and I wouldn’t feel comfortable at all walking around there late at night — there’s just a boarded-up pub next to the station and a load of corrugated-iron motor mechanic shops of the sort you see on Eastenders. The Olympic stadium rose up quite incongrously in the background. I was told by Tam at Village Underground that Hackney Wick has the most artists per square mile (or whatever) in London (or maybe even Europe) but perhaps they were all round the corner somewhere as I didn’t see much artistic, although I could see why the rent might be cheap.

I walked around to the bus terminus, which at least had some houses and shops nearby, and got the number 30 from the start of its route all the way into central London — via Hackney, Dalston, Islington, King’s Cross and so on. I saw plenty of places on the route around Homerton which comfortably fitted the description of the flat where Kim lives at the start of the novel — they’re something of a contrast to where she’ll live at The Angel.

5 Replies to “Shoreditch By Overground”