Selfie Stick, the short story of mine which won through to the first Liars’ League London event of the year is now online in all its formats. Watch the video of Lois Tucker’s excellent reading on YouTube below…

And if you’d rather read the words, the story is now available on the Liars’ League website — here. And there’s a podcast too, which you can also find on the LL website.

The story on the website is the edited version of the story, as close to the performed version as I can remember. One of the great things about having a story read at Liars League is the opportunity to attend the rehearsal in which the actor and also the Liars organisers contribute their thoughts on the story. Everything’s very democratic and the author isn’t obliged to accept any changes but I’ve found that everything that’s been suggested as an edit in my stories has always been for the better. Not that huge alterations are made but it’s an unusual and very valuable opportunity to get a reader’s (or listener’s) perspective on a story. 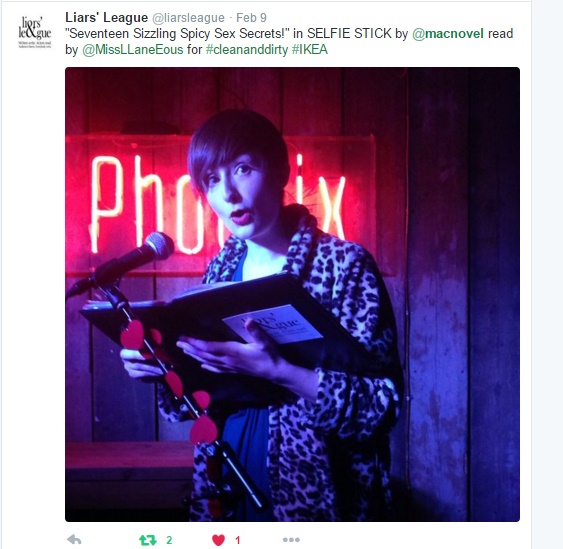 I was very fortunate that Lois was able to read my story. I felt confident that she really understood the tone of the story and the character of Ellie, the narrator and protagonist — she really looked the part too — and even apparently lives not too far from Stoke Newington (watch, read or listen to the story and you’ll understand). It’s a brilliant (and addictive) experience to listen to words that you’ve written hold the attention of an audience and also produce more than the odd laugh and I’m very grateful for Lois’s professional skill in allowing me that privilege.

Speaking of addiction, this is my third Liars League London story and the fifth overall but it’s certainly not a case of everything that I submit to Liars League being selected — far from it. Apart from a lucky streak with my first couple there have been many short stories I’ve sent in that haven’t made the cut. I like to think that’s because I tend to write them at the last minute and may have run out of time to finesse the ones that fell by the wayside but, in truth, it’s probably down to the excellent standard of the stories submitted by other writers.

I was told that the number of submissions for February’s Clean and Dirty theme was particularly high and, as evidence, the other stories read out on the night were all extremely good. These were:  Coming Clean by Sherry Morris, Zoe versus Zita by Michael Button, Saving Face by Emma O’Brien, Gloves by Elisabeth Simon and The Marriage Inspector by Niall Boyce. They can all be found on the Liars League website and I highly recommend them.

My story was last to be performed on the night and it was unnerving to listen to the stories preceding mine. I was paranoid whether it would hold its own against what the audience had already enjoyed. Hopefully, in no small part due to Lois’s performance, it went down well.

As the venue, the Phoenix in Cavendish Square, was packed out with punters who’d paid for their £5 worth — with literally standing room only — I hoped they’d feel like they’d got their money’s worth at the end of the night. For this sort of event it was a very respectable sized audience. It’s a venue used by many well-known stand-up comedians — the likes of Russell Howard and Holly Walsh were playing the venue at the end of February as part of the Phoenix Phringe.

Another brilliant aspect to having a story read at Liars’ League is the way the Liars promote the performance on social media — both before the reading and afterwards when the videos and website are updated.

I’ve taken a few screenshots of the tweets and Facebook posts that have very inventively promoted my story and, if I can be forgiven indulging myself, I’ve added some into this post.

As can hopefully be divined by the tone of the tweets, the story is a very post-ironic, tongue-in-cheek description of a couple revitalising their relationship through homage to a particular genre of 1970’s film-making (and making a few nods to its more modern and ubiquitous re-invention). When I started writing the story I asked my Facebook friends for inspiration on the genre (which is euphemistically referred to as featuring ‘soft-focus sex kittens’ in the story — not to be confused with internet cat memes). My friend Jon, who came along to the reading, pointed me in the direction of this classic Grolsch ad Fortunately my timeline didn’t become any more polluted. I have very upstanding friends.

Despite the tweet above, when I re-read the story I was surprised that despite its depiction of rather graphic situations, the writing itself is not explicit at all — nothing that would remotely interest the Bad Sex Award. Anything lurid is all in the reader’s imagination — and in the case of the performance given an expertly knowing wink from Lois’s reading. As she comments on Facebook…PHWOOOAAAARRR…