It’s not some sort of weird business school acronym but the local shorthand for one of the best art galleries in the US — the San Francisco Museum of Modern Art.

It’s a little confusing as, according to the guidebooks, a very similar acronym — SoMa — is used to refer to the district of the city (South of Market [Street]) where the modern art museum is located.

The entrance fee for SFMoMA is $18 — which should make us based in around London very grateful for the free entrance to Tate Modern — the SFMoMA’s equivalent. I used a ticket that had been bought for a package of attractions — like cable cars and the Fisherman’s Wharf aquarium — so had about half an hour to look around the San Francisco collection of 2oth century artistry.

The museum has an example of one of the most seminal exhibits in modern art history — Duchamps’ Fountain. This is the famous urinal that was meant to be submitted to the New York Society of Independent Artists show in 1917 (although it actually wasn’t exhibited) as an example of how virtually anything could be considered modern art.

I was quite excited to see it in the San Francisco museum but apparently it’s not the original but one of eight replicas made by Duchamp in the 1960s, which are all on show at prestigious modern art museums (including the Tate).

So it’s a pretty iconic piece — the original piece of shock-value modern art that provoked millions of ‘I could do better than that’ comments over the last century…and it would obviously be well known to Kim. 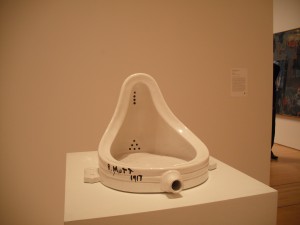 A definite original in the gallery — and one that Kim would enjoy — is a Mark Rothko painting — Number 14. Â It seems that Rothko painted a few different works with the same title. This one is from 1960 and is in red and purple. I was persuaded of the significance of these Rothko blocks of colour by the Simon Scharma BBC documentary and, as this blog I’ve found online quotes of the artist, it’s easy to see that the paintings have an effect ofÂ Â â€œserenity about to explode.â€

Serenity about to explode — that would be an apt description to work to for the first part of my novel.